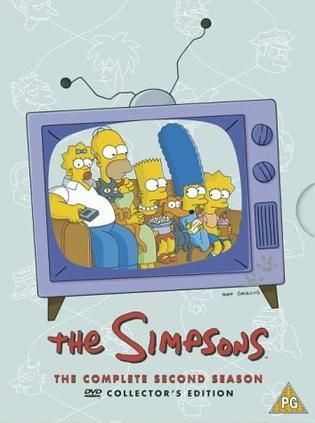 辛普森一家第二季是(1991)美国CBS马特·格罗宁,詹姆斯·L·布鲁克斯,萨姆·西蒙,约翰·维蒂,杰伊·库根,华莱士·沃洛达斯基,约翰·斯瓦兹韦德,埃德加·爱伦·坡,创作的动漫/卡通，由著名演员竹井乔治,乔恩·拉威茨,丹尼·德维托,弗兰克·维尔克,崔茜·尤玛,奥黛丽·米德斯,林哥·斯塔尔,达斯汀·霍夫曼,克劳斯·利特曼,丹尼尔·斯特恩,主演，本季终 / 共22集！
The Simpsons" second season originally aired between October 11, 1990 and May 9, 1991, and contained 22 episodes, beginning with "Bart Gets an F". Another episode, "Blood Feud" aired during the summer after the official season finale. The show runners for the second production season were Matt Groening, James L. Brooks, and Sam Simon, who had also been EPs for the previous season.[1] The DVD box set was released on August 6, 2002 in Region 1, July 8, 2002 in Region 2 and in September, 2002 in Region 4. The episode "Homer vs. Lisa and the 8th Commandment" won the Emmy Award for Outstanding Animated Program (For Programming less than One Hour), and was also nominated in the "Outstanding Sound Mixing for a Comedy Series or a Special" category.