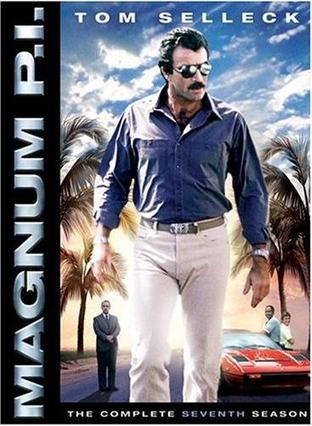 夏威夷神探第一季是(1980)美国其他唐纳德·P·贝里萨里奥,创作的犯罪/历史，由著名演员Tom·Selleck·...·Thomas·Sullivan·Magnum,·IV,John·Hillerman·...·Jonathan·Quayle·Higgins·III,主演，全剧完结 / 共18集！
Thomas Sullivan Magnum, III grew up with a father in the Navy, who died when he was ten, and entered the Naval Academy at 18. Magnum, a third generation Naval officer, graduated the Academy, became a Navy Seal, and was sent to Vietnam. He made two life-long friends, Theodore "TC" Calvin and Orville "Rick" Wright, while serving in Vietnam. After the war, Magnum was transferred to Naval Intelligence, and stationed in Pearl Harbor. His buddies retired from the military. TC opened up a helicopter tour guide service, while Rick was a club manager. At the age of 33, Magnum woke up one morning and realized he was never 23. He quit the Navy, got a PI license and opened a practice in Hawaii. He was eventually hired by a world-renowned author and playboy, Robin Masters, to monitor security at Robin"s Nest, a huge estate on the north shores of Oahu. Robin Masters would jet from one part of the world to another, and visit his various estates, and write best selling novels. Robin"s Nest is run by Jonathan Quayle Higgins III, a proper Englishman. Higgins was in lineage of a Duke and served in the Royal Army as a Sergeant Major. Magnum lives in Robin"s guest house, and drives Robin"s Ferrari. As a result, Higgins treats Magnum as a leech; however deep down they have great respect for each other. The series follows Magnum on his various adventures, involving clients, guests staying on the estate, or plots involving his days in Vietnam. Magnum requires assistance occasionally from his friends, TC, Rick, Asst. D.A. Carol Baldwin, his buddies in Naval Intelligence; even Higgins lends a hand from time to time. Written by Tom