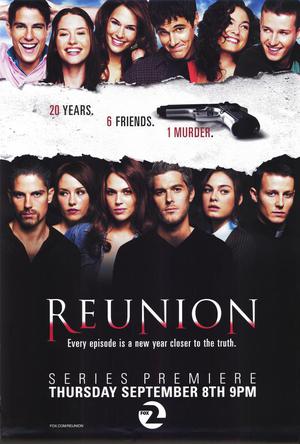 重逢第一季是(2005)美国FOX创作的都市/情感，由著名演员Will·Estes,Sean·Faris,Dave·Annable,Alexa·Davalos,Amanda·Righetti,Chyler·Leigh,Mathew·St.·Patrick,主演，全剧完结 / 共13集 无字幕 勿求！
Part character drama and part mystery, REUNION marks a groundbreaking concept in series television as it chronicles the lives of a group of six friends over the course of 20 years – all in just one season. From the hopes and dreams of 18-year-olds to the realities that irrevocably mark those lives two decades later, REUNION ’s stories are of love and loss, marriage and death, triumph and scandal. WILL (Will Estes, “U-571,” “American Dreams”) longs to leave his small town behind. Aided by an athletic scholarship, he will be the first in his family to go to college. CRAIG (Sean Faris, “Life As We Know It”), handsome and privileged, looks forward to the Ivy League with his girlfriend, SAMANTHA (Alexa Davalos, “The Chronicles of Riddick”), whose ambition is surpassed only by her looks and intelligence. The beautiful and sensual JENNA (Amanda Righetti, THE O.C.) dreams of becoming an actress; behind his cynicism, AARON (Dave Annable, “Little Black Book”) dreams that his relationship with Jenna will go beyond friendship. CARLA (Chyler Leigh, “Not Another Teen Movie”), innocent and quirky, must choose between loyalty to her father and staying near her best friends. REUNION opens in 2005 at the funeral of one of the friends, whose death is being investigated by DETECTIVE MARJORINO (Mathew St. Patrick, “Six Feet Under”). Before the identity of the deceased is revealed, we’re transported back to 1986, as the group is celebrating their high school graduation. The pilot episode follows all six through the summer of 1986, and we witness the formative events that alter their dreams and desires forever. Episode two finds the group a full year later, in 1987; episode three tells the story of a seminal event in 1988, and so on – culminating in the season finale at the friends’ 20th high school reunion. REUNION also will build toward answering two important questions raised in episode one: Which of the friends is dead? And how did that death occur?